Apple unveiled its brand new iPhones at its “Far Out” event this Wednesday, but reserved its biggest changes for its iPhone 14 Pro and iPhone 14 Pro Max models. The new standout feature: The iPhone 14 Pro and 14 Pro Max each lack a notch. In its place is a small pill-shaped screen cutout that houses a revamped TrueDepth camera unit for Face ID, selfies and video calls. Rather than ignore the cutout, Apple built a system of moving alerts and notifications called Dynamic Island that utilizes the black space around it. Strange name aside, the feature in-person is compelling and looks cool.

Dynamic Island, not present on the iPhone 14 or iPhone 14 Plus, is just one of the ways Apple widened the gap between Pro and non-Pro iPhone models. Another way is price. The iPhone 14 Pro starts at $999 which is $200 more than the iPhone 14 that starts at $799. The 14 Pro costs the same price as previous Pro models and the iPhone X which debuted in 2018. But some people will be put off by the 14 Pro’s price or the 14 Pro Max which starts at $1,099.

From the back, the iPhone 14 Pro doesn’t look that much different from last year’s flagship, the iPhone 13 Pro. But from the front, the 14 Pro’s display cutout looks contemporary and fresh compared the notch on the 13 Pro. The first thing I noticed picking up an iPhone 14 Pro was that the infamous notch was gone. The pill-shaped display cutout is so much smaller in comparison.

Apple’s Dynamic Island interface works so well, too. For example, I had a song in Apple Music playing. When I exit the app there was was a tiny waveform on one side of the cutout and a minute thumbnail featuring album artwork on the other. When I tapped on the Dynamic Island, I was immediately taken to the song in the Apple Music app.

Of course the cutout is just one part of the Super Retina XDR display which can now hit 2,000 nits of brightness for better visibility in bright light. By contrast, the iPhone 13 Pro maxes out at 1,200 nits of brightness. The 14 Pro uses LTPO (low-temperature Polycrystalline oxide) technology to bring the refresh rate down to 1Hz, which could help save on battery drain and allow for Always-On display. The 13 Pro’s LTPO screen bottoms out at 10Hz. 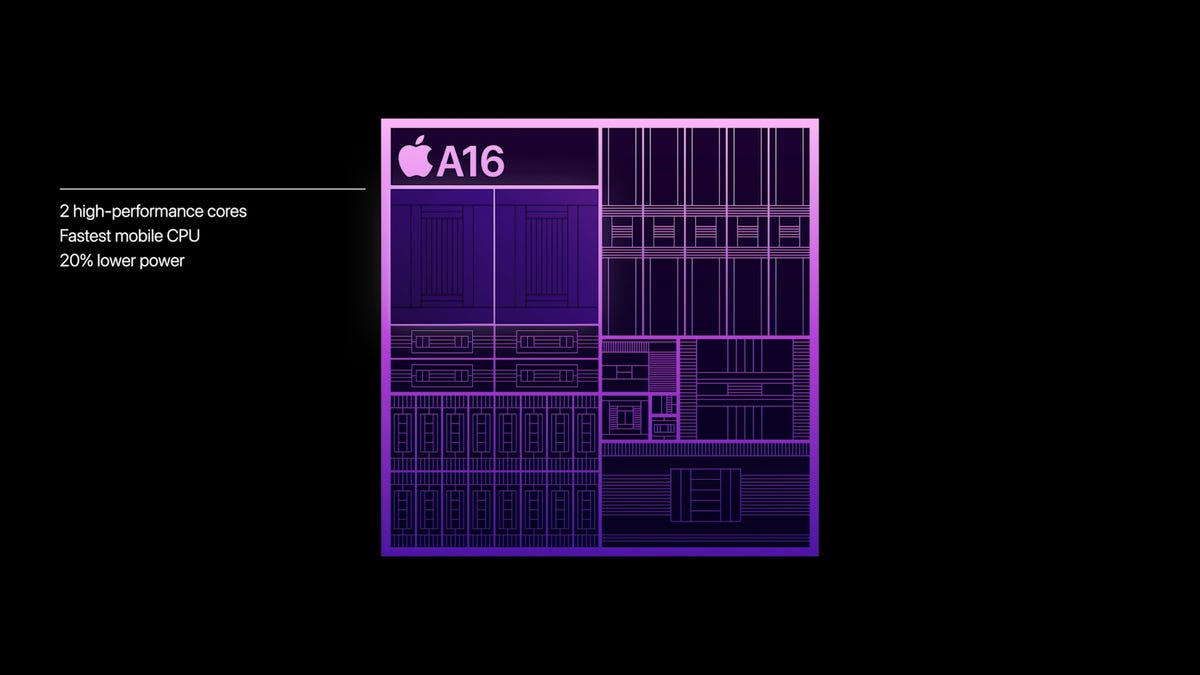 There’s also the new A16 Bionic chip which this year is just reserved for Pro models. The iPhone 14 and 14 Plus use the same version of the A15 Bionic chip found in last year’s iPhone 13 Pro. The A16 chip is more efficient and uses 20% less power than the A15 chip.

The A16 chip features 16 billion transistors on a 4-nanometer process versus 15 billion transistors on the A15’s 5-nanometer. Apart from the added transistor count the new manufacturing process, the jump in computational power might not be as significant from the 13 Pro to the 14 Pro as it was from the 12 Pro to 13 Pro. It’s also uncertain how much RAM the iPhone 14 Pro will have as Apple historically doesn’t share how much RAM is in the iPhone.

The GPU sees an upgrade as well, with 50% more memory bandwidth. The display engine on the A16 Bionic chip helps power the LTPO display as well as the Dynamic Island. Apple says the A16 Bionic’s neural engine is capable of 17 trillion operations per second, which is needed for computational photography.

In my few minutes with the iPhone 14 Pro and 14 Pro Max, system animations seemed smooth and iOS 16 peppy.

The iPhone 14 Pro will feature a 48-megapixel camera. The quad-pixel sensor uses pixel binning to group four pixels and have them act as one large pixel for better light capture. Android phones including the Galaxy S22 Ultra employ a similar technique with high-megapixel camera sensors. The handset’s Pro Raw mode allows photos to be captured at its full 48-megapixel resolution.

Apple developed a new computational image-processing method to take advantage of the new pixel pattern for better color accuracy and detail. It’s called Photonic Engine, which improves the iPhone Pro’s camera performance two times in low-light compared with the iPhone 13 Pro. The 14 Pro and 14 Pro Max can also use the 48-megapixel sensor to “punch-in” a photo, emulating a 2x zoom with the middle 12-megapixels of the sensor.

In video capture, Apple said the iPhone 14 Pro will come with Pro Video and Cinematic modes that can now record at 4K and 24 frames per second. Both Pro models also get Apple’s new video image stabilization which is called Action mode. Essentially when you are filming a video, on the top-left corner of the camera preview is the Action mode icon. When i tried it out, it seemed to work well smoothing out hand-shakes. i noticed that if I had video resolution set to 4K that Action mode reduced it down to 2.8K. 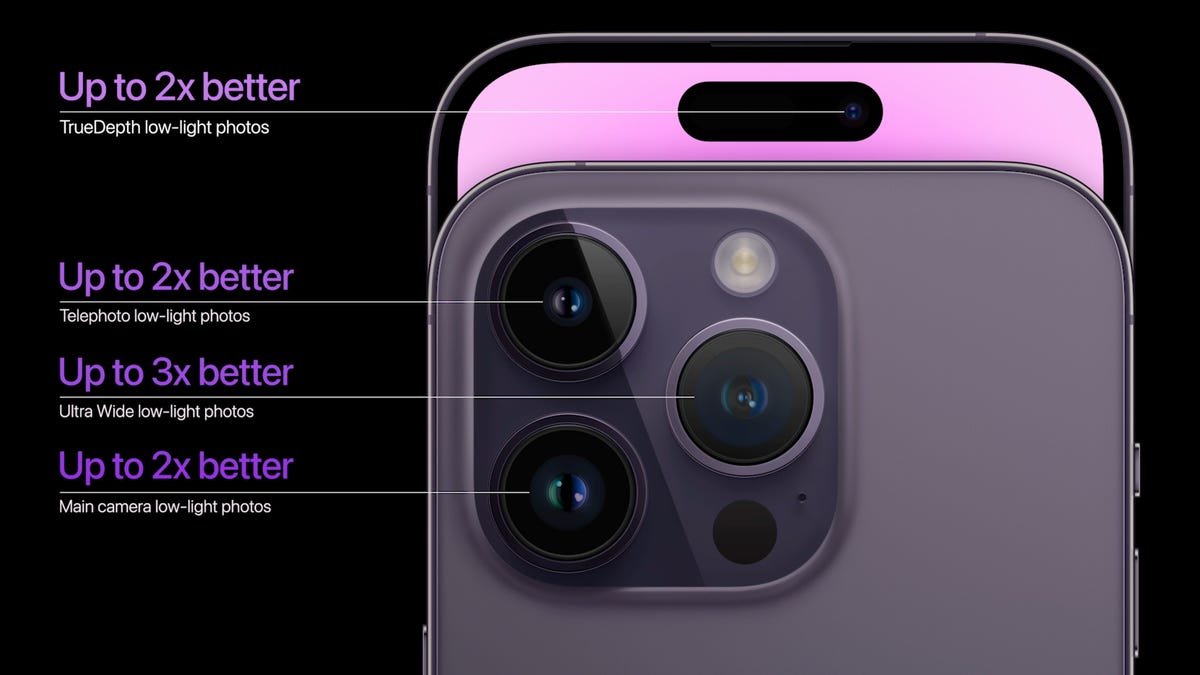 With the release of the iPhone 14 Pro and 14 Pro Max, Apple also discontinued the iPhone 13 Pro and 13 Pro Max. Even though Apple isn’t selling last year’s Pro models doesn’t mean it’s entirely gone. Various third-party retailers and carriers might continue to sell the old Pro. But should you get an iPhone 13 Pro or and iPhone 14 Pro?

In terms of features, hardware and lifespan the iPhone 14 Pro seems to outshine the iPhone 13 Pro in nearly every way. However, sometimes there isn’t a drastic difference between the two phones. If you own an iPhone 13 Pro it looks like upgrading to the iPhone 14 Pro is unnecessary. But if you have an older iPhone and are trying to choose between the two, I’d likely push you towards the newer 14 Pro, unless you’re getting an absolute killer discount on the 13 Pro.

Apple said the iPhone 14 Pro will feature all-day battery life, longer than previous models. It’ll also include the newly unveiled features found in the base iPhone 14, such as Emergency SOS via satellite, a satellite-based system for communication in cellular and Wi-Fi dead zones, and Crash Detection, which lets the device know if you’ve been in a car accident.

The upcoming iOS 16 will be the operating system powering Apple’s iPhone 14 line out of the box.

Preorders start on Sept. 9, with the phones launching on Sept. 16.