Nowadays, every time I view an image of something in the cosmos, I squint in suspicion before reveling in awe. I find myself wondering: Is this actually what that thing looks like?

Most of the time, scientists add artistic flourishes to their space-y images. This isn’t just for fun (though it is quite fun), but because a little bit of colorizing goes a long way when emphasizing raw planetary visuals or depicting cosmic light undetectable by human pupils.

What this means, for us spacegazers, is that no matter how hard NASA’s James Webb Space Telescope might’ve tried to convince us, the Carina Nebula doesn’t resemble warm, melted toffee. Despite what elementary school textbooks say, Venus isn’t a mustard yellow sphere. And contrary to what the Hubble Space Telescope suggests, the Veil Nebula is unfortunately not an iridescent rainbow worm. I could go on.

So, whenever I get to glance at an image of a realm beyond Earth I know isn’t colorized, I stare a little longer than usual — and on Tuesday, we were blessed with one such marvel.

Behold, the left side of the following image, taken by NASA’s Juno spacecraft. It’s approximately how Jupiter’s surface would appear if we could somehow gawk at it like we admire the moon. King of the solar system, indeed. 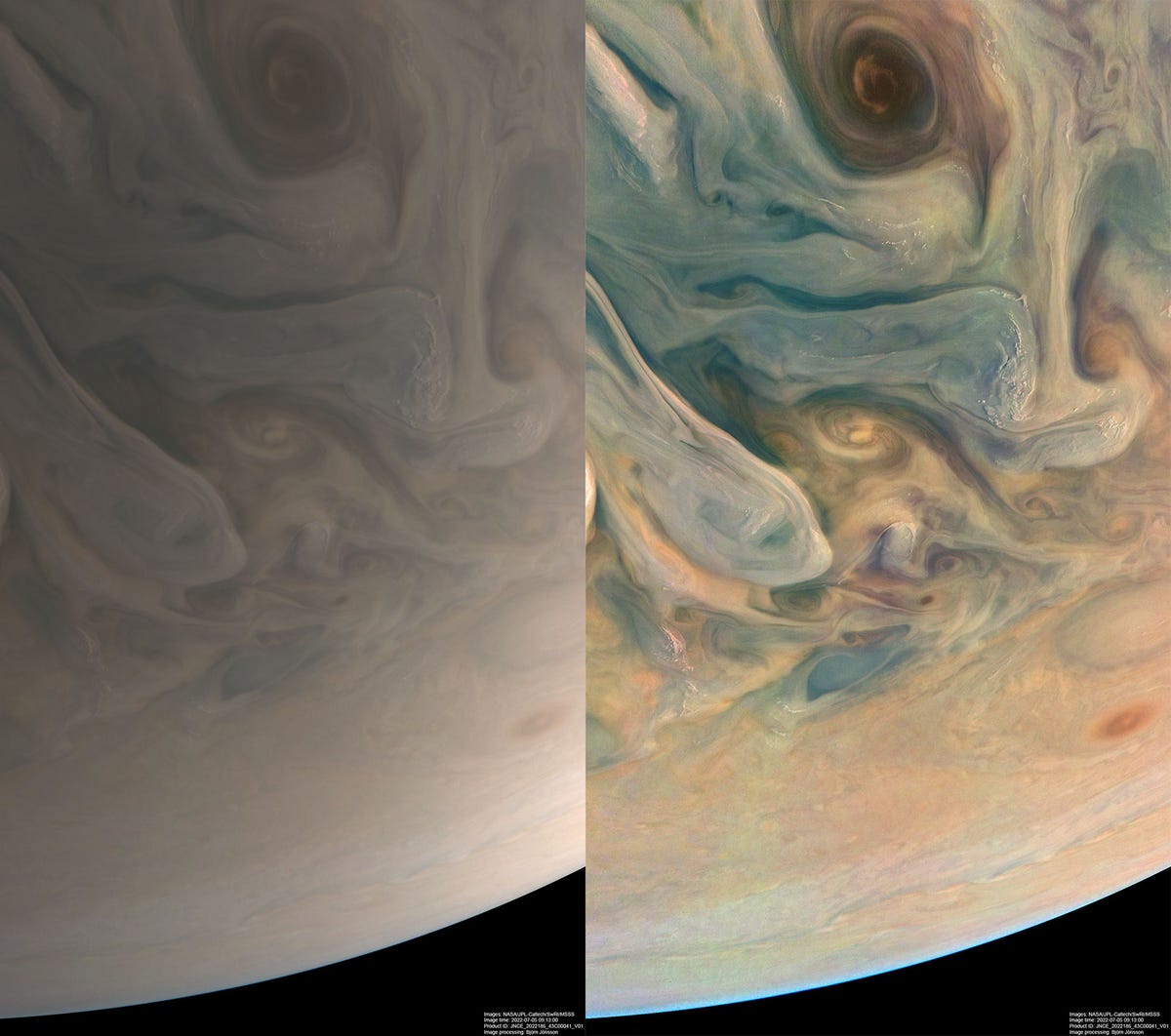 Data by NASA/JPL-Caltech/SwRI/MSSS, and image processing by Björn Jónsson

Can’t help but peer at the right side? Same. But be careful. That’s one of those suspicious processed images. It has an increased color saturation and contrast to sharpen small-scale Jovian features, NASA said in a statement. This manipulation was important to reduce noise or other artifacts in the portrait, the agency explains.

“This clearly reveals some of the most intriguing aspects of Jupiter’s atmosphere,” NASA said,  “including color variation that results from differing chemical composition, the three-dimensional nature of Jupiter’s swirling vortices, and the small, bright ‘pop-up’ clouds that form in the higher parts of the atmosphere.”

Of course, this version of Jupiter’s marbled skin is undeniably more visually striking – but consider how the left-side is our reality. Out in space, there’s an orb made of swirling gas that could fit more than 1,300 Earths within. And…it probably looks just like that? 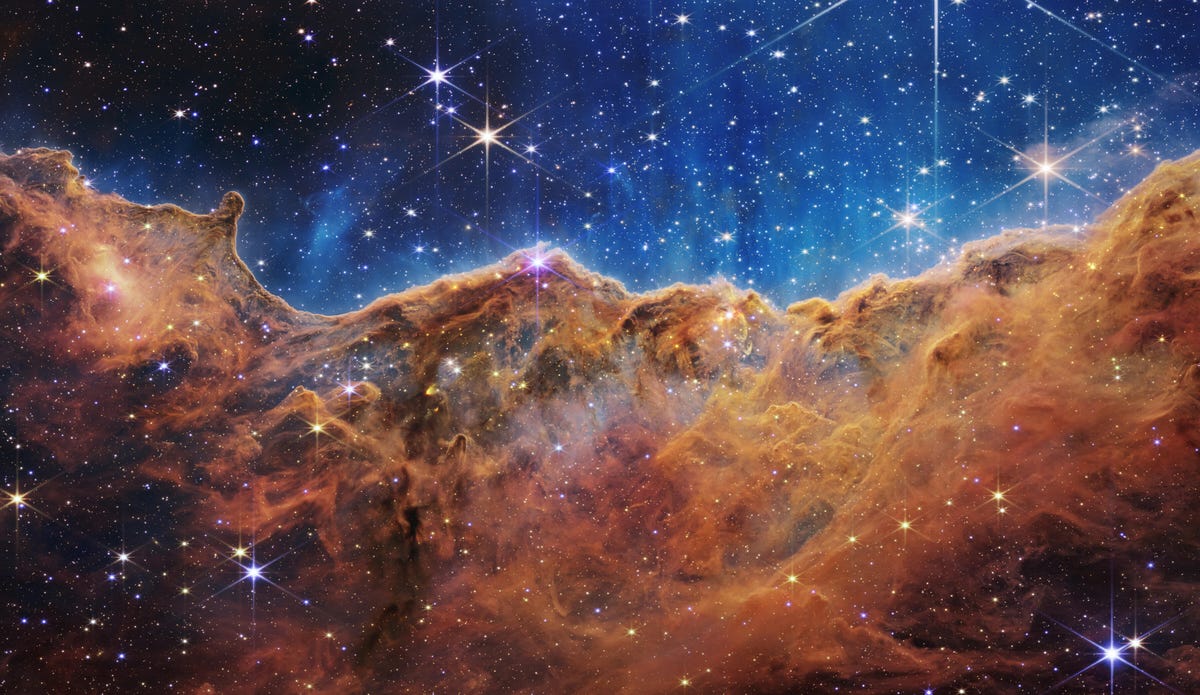 The James Webb Space Telescope’s Image of the Carina Nebula.

Our latest special lens on Jupiter is thanks to citizen scientist Björn Jónsson, who collected and compiled publicly available data taken with NASA’s Juno mission. Juno is a spacecraft that spans the width of a basketball court and makes long, looping orbits around the red-brown world while capturing information and images about its planetary muse.

Since it launched from Earth in 2011, Juno has been a force.

It has sent back a spectacular photobook of Jupiter pics, ranging from watercolor vortices colorized in azure and opal, to a gorgeous pink-toned view of the Jovian atmosphere and even duller, more realistic images of its layers. 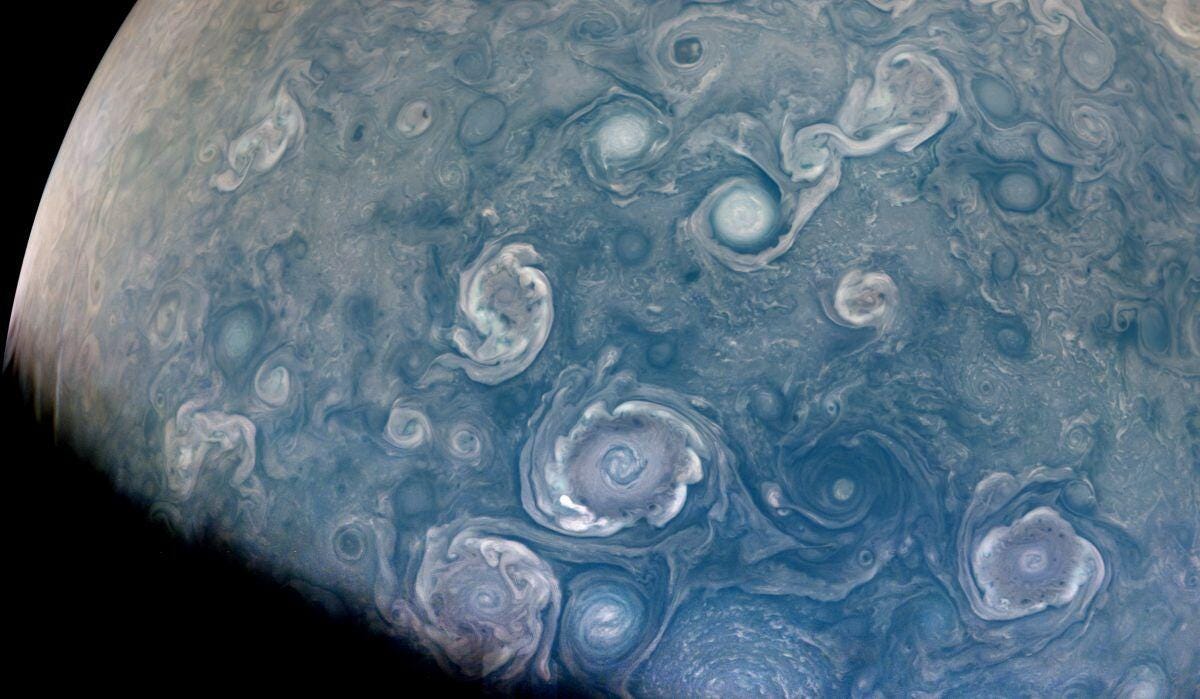 Plus, on April 9, Juno reached its point of closest approach to Jupiter, getting just over 2,050 miles (3,300 kilometers) above the planet’s cloud tops, paving the way for this sort of stop-motion movie.

On April 9, JunoCam captured what it would look like to ride along with the spacecraft. Citizen scientist Andrea Luck created this animated sequence using raw JunoCam image data.

Data by NASA/JPL-Caltech/SwRI/MSSS, and image processing by AndreaLuck

Regarding the new gas giant image revealed by Jónsson, Juno was about 3,300 miles (5,300 kilometers) above Jupiter’s cloud tops at a latitude of about 50 degrees. “At that moment, the spacecraft was traveling at about 130,000 mph (209,000 kilometers per hour) relative to the planet,” NASA said.

Yet another win for Juno, and another introspective space treasure for us.

It’s things like this that elicit some sort of strange feeling in me — a mixture of existential dread, amazement, silence. They’re reminders of our small, yet remarkably intelligent, vantage point of the universe.