Now that we have a powerful lens pointed toward the deepest regions of the universe, our definition of “surprise” has slightly altered when it comes to astronomy pics.

It’s no longer surprising, really, when NASA’s James Webb Space Telescope reveals yet another brilliant, ancient piece of the cosmos. At this point, we know to expect nothing less from the trailblazing machine.

Instead, whenever the telescope sends back a jaw-dropping space image, it now elicits more of a “JWST strikes again” feeling. And still, our jaws legitimately drop every single time.

This sort of dissonant version of “surprise” has happened yet again — to a pretty extreme degree. Last week, scientists presented the JWST’s brilliant view of a galaxy cluster merging around a massive black hole that houses a rare quasar — aka an incomprehensibly bright jet of light spewing from the void’s chaotic center.

There’s a lot going on here, I know. But the team behind the find thinks it could escalate even further.

“We think something dramatic is about to happen in these systems,” Andrey Vayner, a Johns Hopkins astronomer and co-author of a study about the scene soon to be published in the Astrophysical Journal Letters, said in a statement. For now, you can check out a detailed outline of the discovery in a paper published on arXiv. 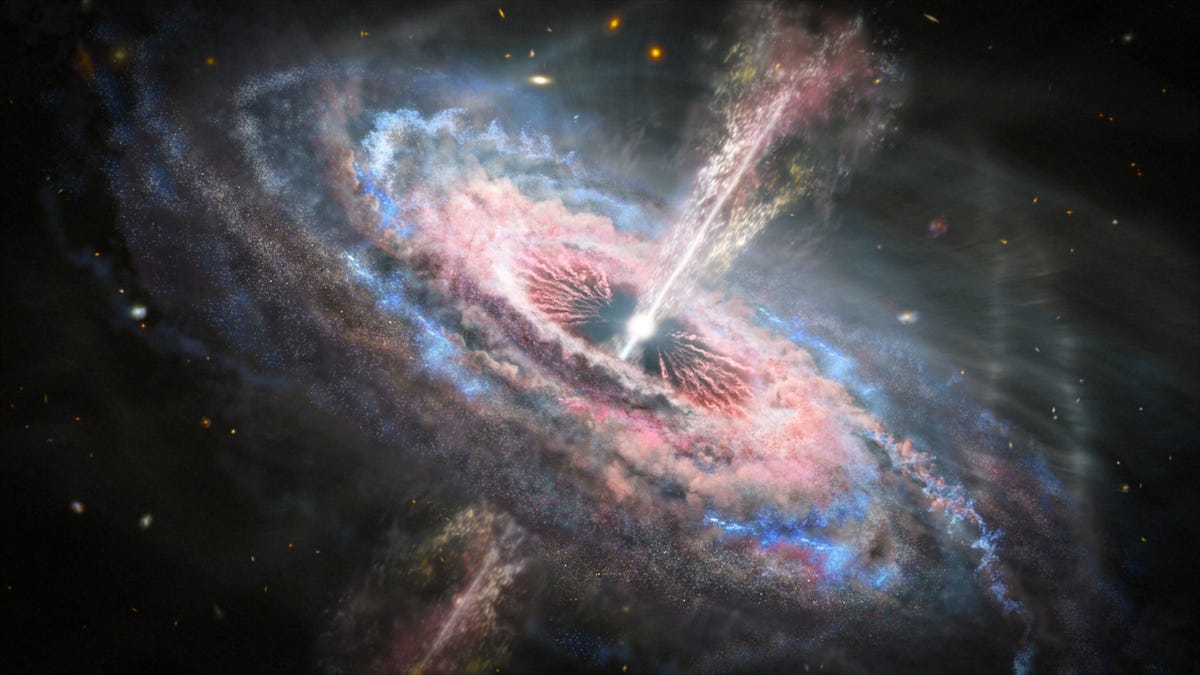 An artist’s concept of a galaxy with a brilliant quasar at its center.

Especially fascinating about this portrait is that the quasar at hand is considered an “extremely red” quasar, which means it’s super far away from us and therefore physically rooted in a primitive region of space that falls near the beginning of time.

In essence, because it takes time for light to travel through space, every stream of cosmic light that reaches our eyes and our machines is seen as it was long ago. Even moonlight takes about 1.3 seconds to reach Earth, so when we peer up at the moon, we’re seeing it 1.3 seconds in the past.

More specifically with this quasar, scientists believe it took about 11.5 billion years for the object’s light to reach Earth, meaning we’re seeing it as it was 11.5 billion years ago. This also makes it, according to the team, one of the most powerful of its kind observed from such a gargantuan distance (11.5 billion light-years away, that is).

“The galaxy is at this perfect moment in its lifetime, about to transform and look entirely different in a few billion years,” Vayner said of the realm in which the quasar is anchored.

In the colorful image provided by Vayner and fellow researchers, we’re looking at several things.

Each color in this image represents material moving at a different velocity.

On the left is a Hubble Space Telescope view of the region studied by the team, and in the middle is a blown-up version of the spot that the JWST zeroed-in on. Glance to the far right of this image, where four individually color-coded boxes are seen and you’ll be analyzing different aspects of the JWST data broken down by velocity.

Red stuff is moving away from us and blue toward us, for instance.

This classification shows us how each of the galaxies involved in the spectacular merger are behaving — including the one that holds the extreme black hole and accompanying red quasar, which is, in fact, the only one the team expected to uncover with NASA’s multibillion dollar instrument.

“What you see here is only a small subset of what’s in the data set,” Nadia L. Zakamska, a Johns Hopkins astrophysicist and co-author of the study, said in a statement. “There’s just too much going on here so we first highlighted what really is the biggest surprise. Every blob here is a baby galaxy merging into this mommy galaxy and the colors are different velocities and the whole thing is moving in an extremely complicated way.”

Now, Zakamska says, the team will start to untangle the motions and enhance our view to an even greater extent. Already, though, we’re looking at information far more incredible than the team expected to begin with. Hubble and the Gemini-North telescope previously showed the possibility of a transitioning galaxy but definitely didn’t hint at the swarm we can see with the JWST’s awesome infrared equipment. 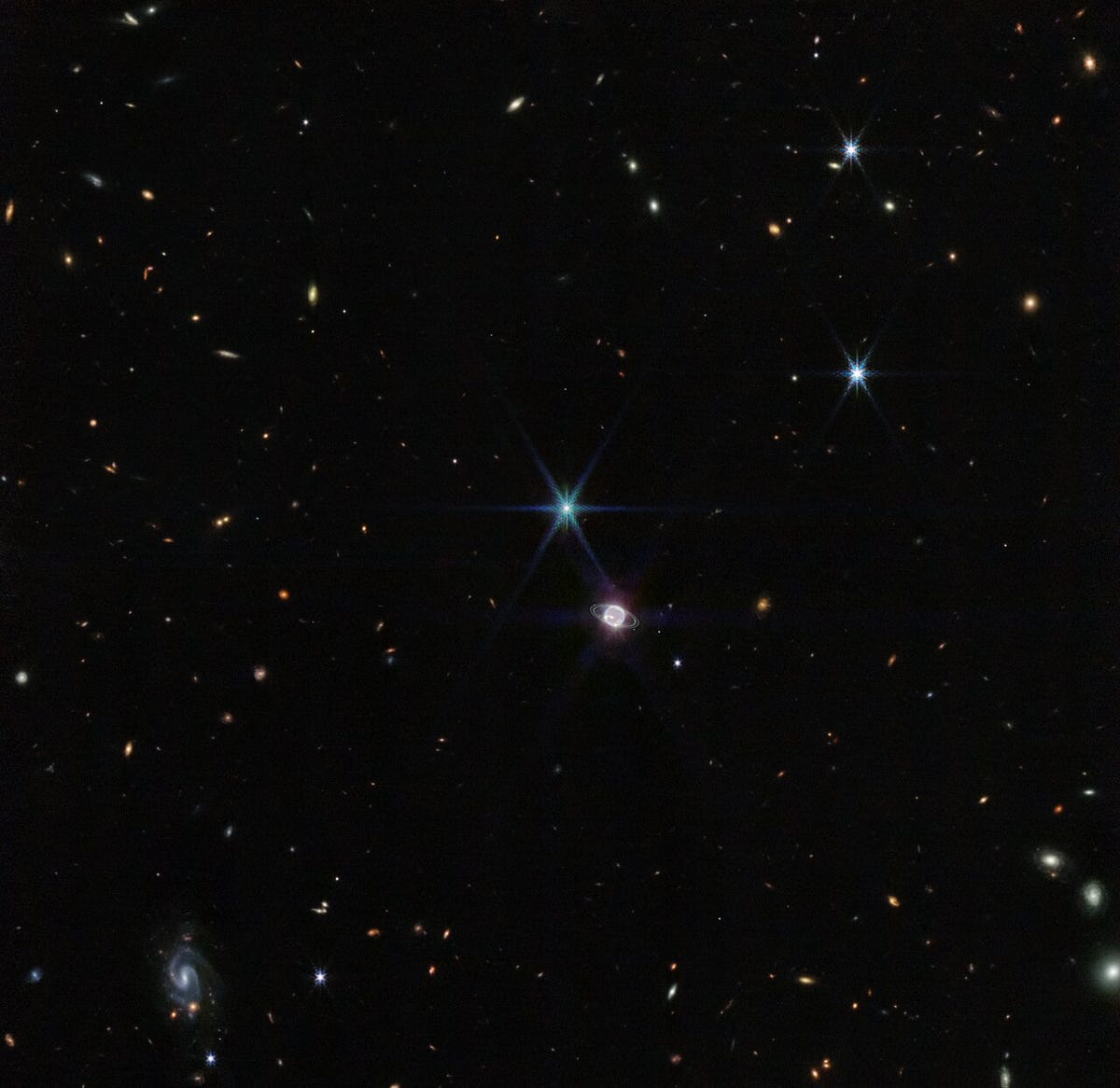 In another spectacular image taken by Webb’s Near-Infrared Camera (NIRCam), a smattering of hundreds of background galaxies, varying in size and shape, appear alongside the Neptune system.

“With previous images, we thought we saw hints that the galaxy was possibly interacting with other galaxies on the path to merger because their shapes get distorted in the process,” Zakamska said. “But after we got the Webb data, I was like, ‘I have no idea what we’re even looking at here, what is all this stuff!’ We spent several weeks just staring and staring at these images.”

Soon enough, it became clear that the JWST was showing us at least three separate galaxies moving incredibly fast, the team said. They even believe this could mark one of the densest known areas of galaxy formation in the early universe. 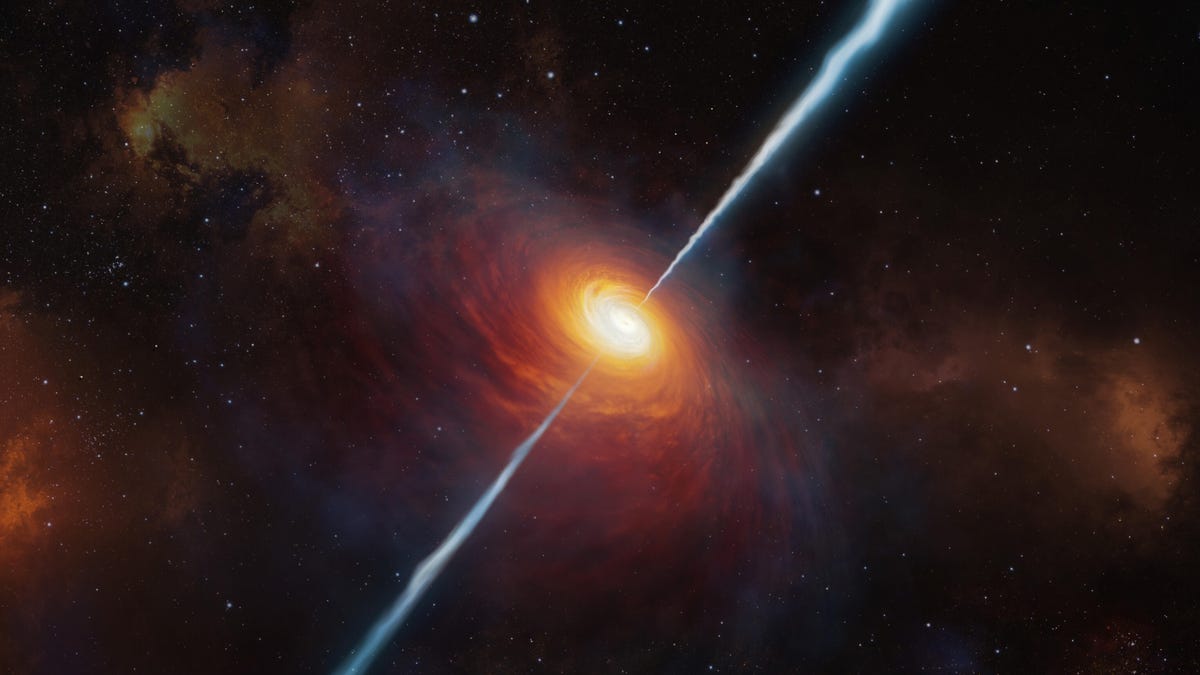 An artistic impression of the quasar P172+18, which is associated with a black hole 300 times more massive than the sun.

Everything about this complex image is mesmerizing. We have the black hole, that Zakamska calls a “monster,” a highly rare jet of light being spit from that black hole and a gaggle of galaxies on a collision course — all seen as they were billions of years in the past.

So, dare I say it? The JWST strikes again, offering us an exceedingly precious cosmic vignette. Cue, jaw drop.