There’s an argument to be made that 2014’s Tales from the Borderlands is actually the best game in the Borderlands series. Now, hold on. Don’t go typing up your angry comments just yet. Hear us out.

Sometimes you just want a capital V capital G Video Game that’s about running and jumping and shooting and looting and the proper Borderlands games are a safe option to pick up and play on that front. But it’s hard to ignore that the franchise has a somewhat inversely proportional relationship between the tightness of the gameplay and quality of the writing: as the shooting got better, the dialogue got worse and the jokes grew more irritating.

Within their respective genres, taking into account what they set out to do, Tales is probably the most successful game in the series: it’s funny, with an interesting story, likeable characters, and at times it’s genuinely moving. Nobody was as surprised as us about that. A Telltale Borderlands game? Madness! But it worked.

Fast-forward eight years and here we are with New Tales From The Borderlands, less a sequel to the Telltale original and more of an alternate reality version of the same idea. What would have happened in 2014 if instead of partnering with Telltale in their prime to make a more story-focused game in the Borderlands franchise, Gearbox just made it themselves? Well, this is the result. And it’s rubbish. 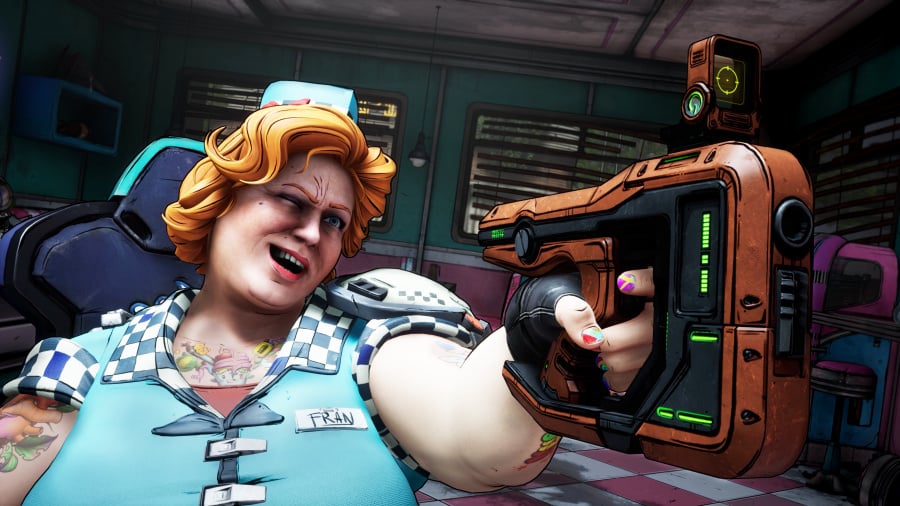 Taking place after Borderlands 3 but without really requiring any knowledge of any previous Borderlands games to understand the story, New Tales has three playable characters that you’ll control at various points throughout the ten hour adventure.

There’s Anu, a smart but anxious scientist who’s a pacifist inexplicably working for a weapons manufacturer. There’s Fran, a frozen yogurt seller in a hoverchair who has anger management issues. And there’s Octavio, a hipster moron who is introduced to us in a cutscene in which he rebukes a pizza vendor for their “problematic” exaggerated-a Italian-a accent-a. It’s as cringe inducing as it sounds.

The three heroes aren’t so much characters as they are merely vessels for the next insipid gag. Anu, for example, is the clever one in the gang right up until she needs to be an idiot for a joke to land. One minute she’s solving complicated physics problems, and the next she doesn’t know how a door handle works. And that’s the punchline. LOL. Fran and Octavio are similarly troubled. Fran’s entire personality is based around her talking about frozen yogurt, creepily offering to give people mouth-to-mouth when they obviously don’t need it, and punching people real hard. That’s it. Octavio just does the stupidest thing imaginable in every situation to drag the story out a little longer. At one point he forgets what the place he works at — where he’s spent half the game, by the way — looks like. They get about ten minutes out of that zinger.

The side characters are a mixed bag. There’s a robot assassin going through a moral quandary about how they make their living and they’re probably the most well-rounded and interesting character in the game. There’s a woman who shouts a lot. There’s a talking gun that says “Bang!” every time it shoots. Most of the side characters either disappear for half the game and then turn up for the last chapter or simply go nowhere. 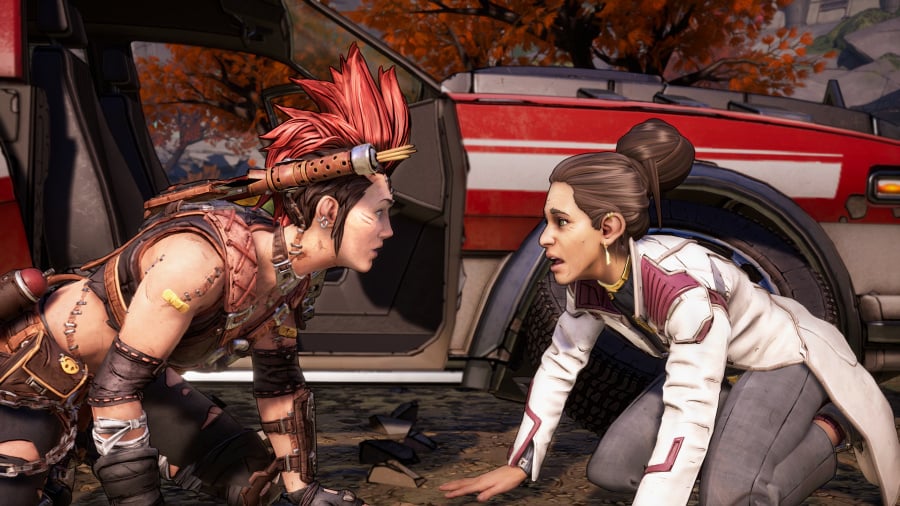 Every now and again between inane comedy routines there’s a story to be told. It involves a magic rock that has the power to help humanity but there’s baddies who want to use it for their own nefarious ends. It’s a slight, low stakes narrative and even at only ten hours it feels drawn out, with long, boring sections where nothing remotely interesting happens to push the tale forward.

By the final chapter we just didn’t care any more. None of the growth feels earned or deserved. And then as a final insult, when we got to the ending we were told that one of the main characters had died, off screen, with no explanation whatsoever for how or why. It was like Poochie flying off to his home planet and dying in a crash in that episode of The Simpsons. Utter nonsense.

Everything about New Tales feels like a poor version of the original, even down to the music. The first game featured a licensed soundtrack that was at times expertly employed. Here, there’s licensed music but it’s thrown together seemingly at random. There’s a cheesy montage scene of the gang getting to know each other backed by a low key, almost dream-pop track, and later a quiet, more reflective scene backed by a jaunty, more upbeat piece. 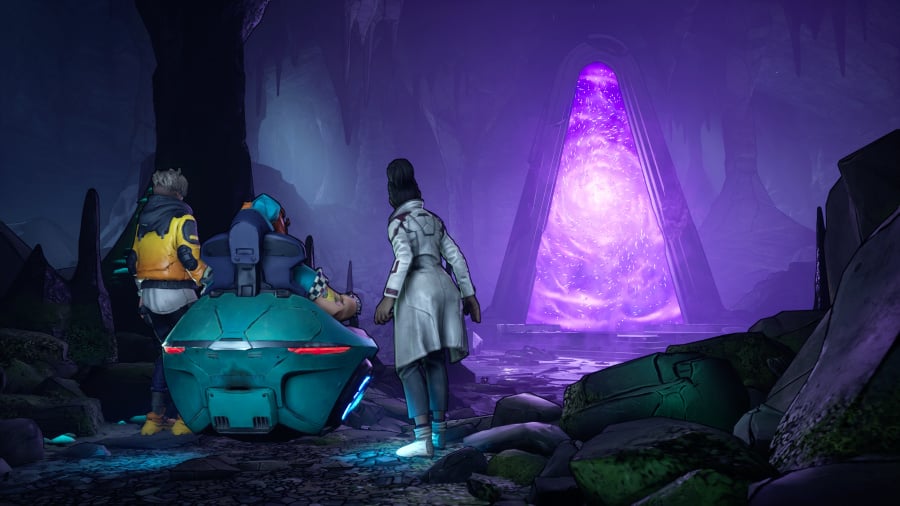 Gameplay-wise, you’ll mainly be walking about and solving very simple puzzles, talking to people, and making choices. There’s minigames, too, for things like hacking and fixing things, but these are borderline impossible to fail so we’re not sure why they exist. There’s quick-time events to take care of the action scenes but these are similarly forgiving, and even allow you to hit the wrong button and then just try again until you get it right.

One such quick time event — which we have to mention because it’s so absurd — involves a character fighting sharks. But instead of seeing them fight the sharks, we see Octavio commentating on how the fight is going while button prompts pop up on screen. It goes on for way too long and it’s so wildly unfunny that we don’t know if it’s even intended to be a joke.

We’re not sure if the developer just couldn’t be bothered to animate the fight with the sharks or if this whole bit is some sort of subversive commentary on the futility of quick time events that just doesn’t land, but whatever the reason for it, let your ol’ pals at Push Square give you a fiver’s worth of free advice: if you have a shark fight, you show the shark fight. Everyone wants to see the shark fight. It’s a f****** shark fight!

We can scarcely recall an occasion where we were more disappointed by a sequel than New Tales from the Borderlands. We wanted to love this. We’d have accepted liking it. But we hate this game. This is a ten-hour narrative adventure that feels four times as long as it needs to be, with dreadful characters, and appalling, relentlessly unfunny jokes. It’s a spectacular misfire, its only success to speak of being the rare example of a sequel so bad that it ruins the original, too.