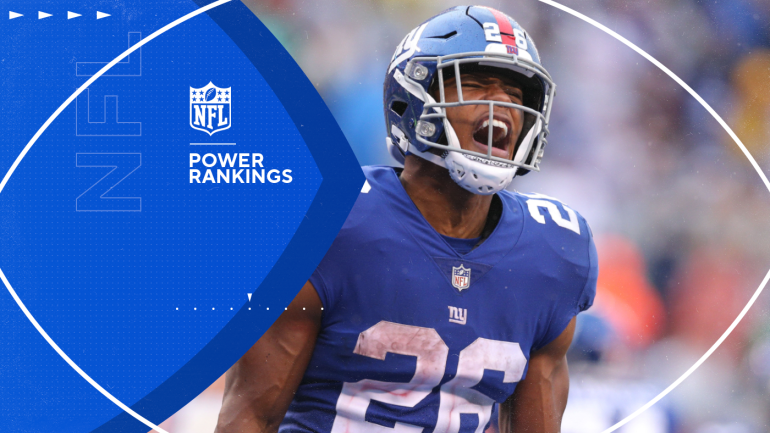 The New York Giants and New York Jets are a combined 7-3 this season.

Can you believe it?

It’s true, but, yes, it’s hard to believe based on preseason expectations. Yet after five weeks of the season, the Jets and Giants are the two biggest surprises of the season, and once again it brings into focus the unpredictability of the NFL.

I dare you to try and figure it out.

The Giants are 4-1 and riding high after beating the Green Bay Packers in London on Sunday. Giants coach Brian Daboll is the leading contender for Coach of the Year right now and has his team playing good, sound, fundamental football. It isn’t pretty, but it’s worked well enough so far to beat the No. 1 seed from each conference from a year ago in the Green Bay Packers and the Tennessee Titans.

The Giants are getting solid quarterback play from Daniel Jones, a nice running game keyed by Saquon Barkley and good defense led by aggressive coordinator Wink Martindale. That has the Giants up into the top 10 of my Power Rankings this week at No. 8.

The Jets upset the Miami Dolphins at home Sunday in a game where the Dolphins were down to third-team quarterback Skyler Thompson because of concussion issues for to Tua Tagovailoa and Teddy Bridgewater. That taints the victory some, but you are what you are in this league and the Jets are 3-2.

Coach Robert Saleh, the one who kept the receipts, might be pulling them out to expose all the doubters from earlier this season. Go ahead and unveil the scroll, Robert. The only names not on there would be either your players or others inside the organization. Let’s be real and admit few saw the Jets at 3-2 and up into the top half of these rankings at No. 14.

Yet here they are after five weeks proving a lot of people wrong. The Giants are doing it even more so. This is why the NFL is king. Nobody knows what’s going to happen week to week or year to year.

The Jets and Giants are a combined 7-3. Simply amazing.

They didn’t play a great game at Arizona, but they found a way. That’s the sign of a good team. Now here come the Cowboys.

Now that Gabe Davis is back putting up numbers, can this offense be stopped? They have the big one this week with the Chiefs. That will be fun.

Words of wisdom: Don’t fall behind by 17 to the Bills this week like you did against the Raiders. The Bills-Chiefs game should be a shootout. I can’t wait.

They got back on track against Atlanta, but they didn’t close out the game the way they would have liked. They still haven’t come close to playing a complete game.

They are 4-1, but they sure made it interesting against the Bears. The defense has to be better as they head to Miami.

That defense can be suffocating, which has keyed this team. It will be fun to see how they match up with the Eagles offense this week.

That defense traveled well to face Carolina, which will be their calling card all year long. The Nick Bosa injury bears watching.

They face the Ravens this week in what should be a real challenge for their defense and coordinator Wink Martindale, who was with the Ravens before going to the Giants.

They just don’t have the look of a deep-playoff team. The passing game is limited and the defense has been worse than expected. They need to pick it up soon.

With Tua Tagovailoa and Teddy Bridgewater out, they had no shot against the Jets. But the defense has been an issue all season long. That’s a major concern.

The defense finally showed up in a game this season, limiting the Bengals and their passing game. Maybe they are adjusting to the new scheme.

They have won three straight games to right their season. It isn’t always pretty to watch, but they are a tough team who will be tough outs for whoever they play as they sit atop the AFC South.

They won two straight road games to help right things, but they still have major issues on defense. That won’t win a lot of games.

Rookie Breece Hall showed in beating the Dolphins that he might be ready to take off and roll up some big numbers. He was that impressive. They are a real shock to be this high.

OK, it’s official. The Super Bowl hangover is real. The question now is whether they can shake it off or will they spend the season feeling down and gloomy?

They are 2-3 and all three losses came on the last play of the game. They are a team that is definitely better than their record.

They won with rookie quarterback Bailey Zappe making his first start, thanks mainly to the defense. That unit played well in shutting out a good offense in Detroit.

They pulled out a fun, high-scoring game against Seattle, but what has happened to their defense? Give credit to Taysom Hill for helping them win Sunday.

They are 2-2-1 but hardly look like a playoff team. Maybe the come-from-behind victory at Denver will get them going – especially on offense.

The defense is a big problem for the Browns. They can’t stop anybody, which won’t win a lot of games, even with an offense that can really run it.

Can you believe Russell Wilson is leading this anemic offense? He has been bad this year, and the question is whether he can fix it.

At 2-3, they just haven’t played as good as expected. They hung around against the Eagles, but they have to find a way to win games against good teams.

At 1-4, their season in serious jeopardy of being over. They’ve lost some tough games, but the start has to be considered a big disappointment.

At 2-3, they’ve been competitive in games. But they just don’t have enough good players to compete for a playoff spot.

They own the Jaguars. They have now beat them nine consecutive times. That is amazing.

The Jaguars turned into the Jaguars again in their loss to the Texans. There is no excuse for that or maybe they just aren’t that good. Trevor Lawrence has to pick it up.

Geno Smith continues to play well, but their defense is terrible. Each week looks like it could be a shootout for this team.

The offense showed some signs of life against the Vikings, which could be something to build upon. They just won’t win a lot of games this season.

Kenny Pickett’s first start was a tough one, even if he did some good things. The Steelers never had a chance at Buffalo, but he kept fighting. That’s a good thing.

The defense was bad again, but this time in the loss to the Patriots the offense was just as bad. They couldn’t even score a point, which is not a good look.

Now that Matt Rhule is out as coach, can Steve Wilks bring some life to this team? The offense has been awful.

When the coach is calling out the quarterback publicly, that’s not a good thing. This thing could unravel in a big way.