By the late ’90s, the golden age of the arcade was a dim and distant memory, and with it the ubiquitous Pac-Man fever of the early ’80s. Not ones to let the yellow puck thing fall by the wayside, Namco moved to reinvigorate its video game icon by having him star in a 3D platformer, which were all the rage at the time. After an initial failed attempt at it with the canceled Pac-Man Ghost Zone, Pac-Man World eventually came together and proved itself to be a solid and successful entry in the Pac-series. Now, Namco has seen fit to revive it once more as Pac-Man World Re-Pac, and though this new release isn’t an outstanding example of what a 3D platformer can be, it certainly does show why these games are enjoyable.

The story opens with the Pac-Family putting the finishing touches on the decorations for Pac-Man’s birthday, when they’re suddenly accosted by the nefarious ghosts and whisked away. It turns out the ghosts are working for the evil Toc-Man, who is celebrating his own birthday and sent them to capture Pac-Man. Pac-Man returns home and realizes what happened. Eager to save his family (and celebrate his birthday), he thus sets out on a quest to rescue them and put Toc-Man in his place. 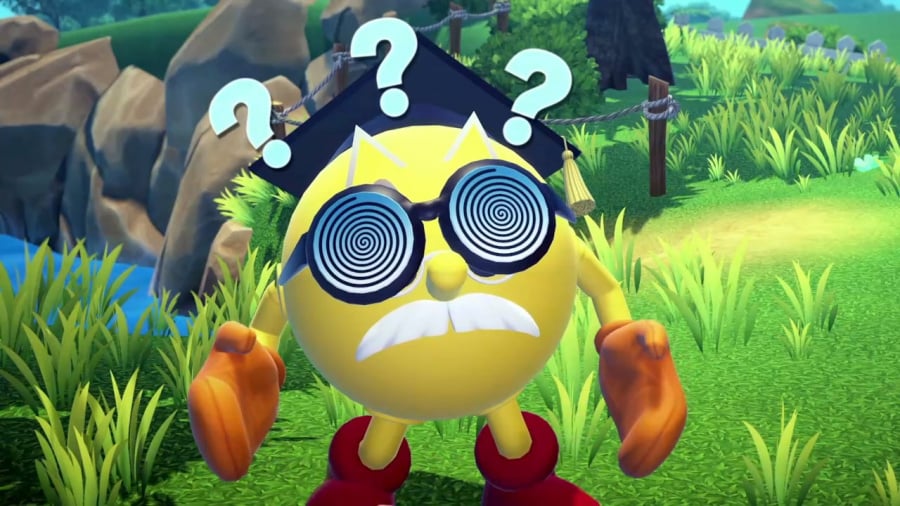 Gameplay in Pac-Man World Re-Pac provides an interesting take on 3D platforming—it’s clear this was designed at a time when the genre was still very much finding its footing. Rather than exploring large overworlds with a freely controlled camera, you traverse a series of mostly linear levels that are viewed with a fixed camera, somewhat like playing a 2D platforming level that gives you a little more freedom of movement. In this sense, it’s more Super Mario 3D World than it is Super Mario 64, but that’s not to say that it feels like a lesser experience for taking the level design in a different direction.

The goal of every stage is simply to break the Toc-Man statue at the end, but the route you take to get there is typically rife with obstacles, enemies, and collectables tucked away on brief side trails. Most foes can be dispatched with a simple Butt Bounce, which also can be used to break certain objects and to give Pac-Man a little more height on his jumps. And for those who struggle with making some of the more precise jumps many levels demand of you, Pac-Man has a helpful flutter jump (just like Yoshi) that can give you a little more hang time to make it across gaps. Rounding out his moveset is a helpful Spin Dash-like move that can be used to destroy enemies, charge certain platforms, or give a burst of speed to get up steep slopes. 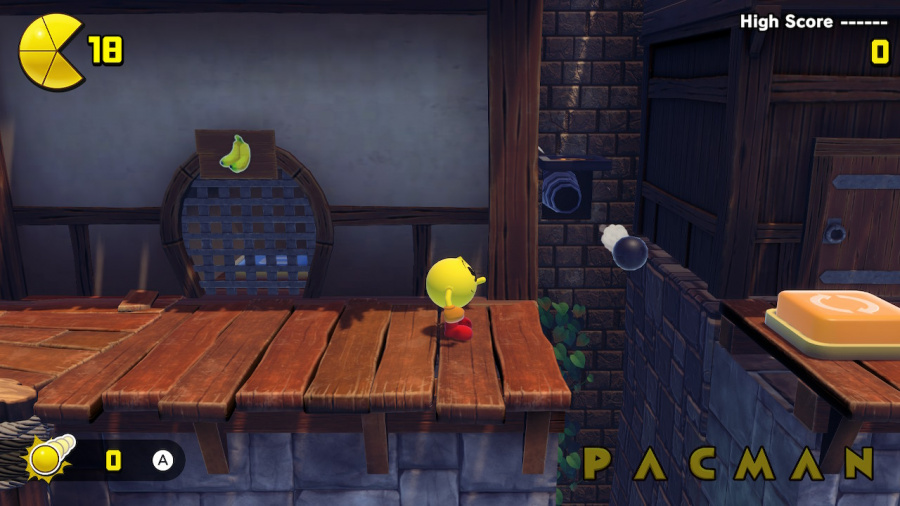 There are a decent amount of gimmicks to help each level feel distinct from the next, which help to keep Pac-Man World Re-Pac feeling fresh throughout its relatively short run. For example, one level has you dodging cannon fire from various pirate ships while another has you running through a terrifying clown funhouse. And though you can reach the end of any given level in just a few minutes if you’re rushing it, there’s a lot more fun to be found in picking up the various collectables along the way.

For example, you often come across Fruit Doors that need a certain fruit to open, usually requiring you explore a side route or backtrack a bit. There are also switches you can hit that will modify some part of the level, such as causing hidden platforms to appear.

Though levels feel appreciably distinct from each other, even when they share a common theme, we found the level design in general to be rather unimaginative. After you’ve played a few stages, you start to know where you can expect to find a ‘hidden’ fruit, for example, and it often feels like the stage gimmicks unique to each level take a backseat to the slopes, doors, and charge platforms that you see in every level. Additionally, the difficulty remains flat for much of the experience. 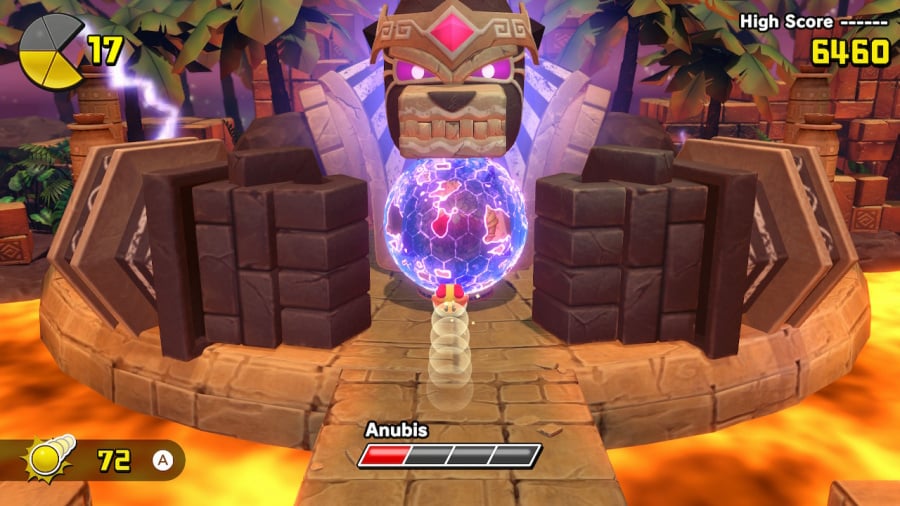 Part of this is likely due to the non-linear nature of the level progression—you’re offered three worlds worth of levels right off the bat—but it has the effect of feeling like you’re not necessarily progressing much when most of the stages are equally suited to be the player’s first. This isn’t to say that Pac-Man World Re-Pac is boring; the controls feel tight and the level designs have just enough challenge that they feel satisfying to complete. The problem is that this is the kind of game that feels like it’s perpetually stuck in first gear, like it’s waiting to show you more complex levels and mechanics that never materialize.

Still, there’s something notably alluring about a platformer that doesn’t try to knock your socks off with outstanding effects or mind-bending stage design, instead focusing on just a few basics that it does really well. Grabbing a power pellet and clearing a room of ghosts feels great no matter how many times you do it here, and you can’t match that feeling of finally snagging the last collectible letter in Pac-Man’s name that had eluded you on your first run of a stage. Bosses are appreciably goofy—with a shmup-themed Galaxian fight being a big standout—and the whole adventure is over just before the point where it overstays its welcome. It would be rather difficult to make the case that Pac-Man World Re-Pac is among the absolute best of its genre, but it’s certainly among the best ‘B-tier’ games. 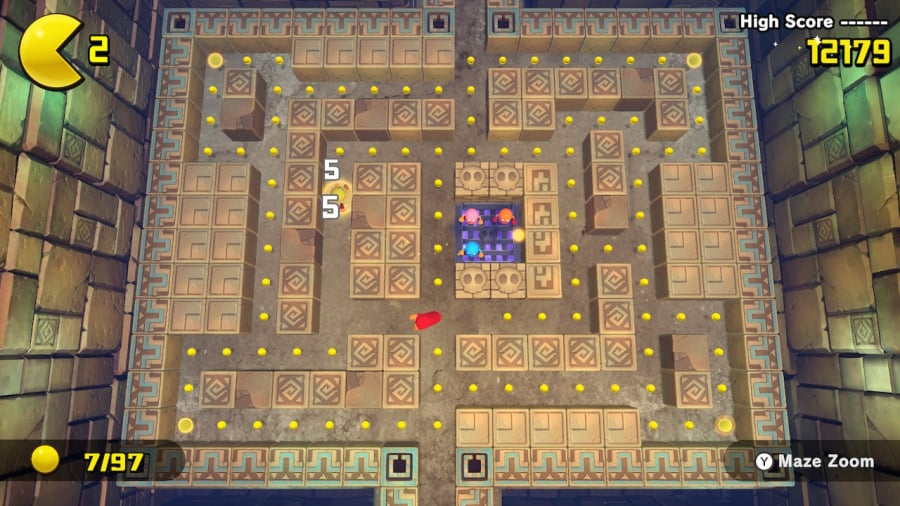 As for presentation, Pac-Man World Re-Pac isn’t as extensive an overhaul as the somewhat recent Crash and Spyro remasters, but it does a solid job of cleaning up the PS1 visuals and updating them for a new generation. Fresh cutscenes have been made to fit the new aesthetic (and to get around the weirdness surrounding the rights to Ms. Pac-Man) while the worlds overall have a brighter, sharper, and more coherent look than they did before. Sure, it may not feel like much of a reimagining of a 20+-year-old game, but it’s clear that this is also much more than a simple remaster; Bandai Namco did a good job in preserving the spirit of the original while buffing out the rough edges.

Performance for the Switch is predictably spotty, although there’s a helpful toggle between performance and resolution. In resolution mode, you’re looking at a rather unstable 20-25FPS experience, while performance mode substantially boosts the frame rate to what appears to be near 60FPS, with some minor drops when things get busier. What’s more fascinating is that the resolution drop for the performance mode is almost imperceptible, to the point that you can’t help but wonder how such a minor change is causing such a massively improved frame rate. If you do end up scooping this up, we’d recommend the first thing you do before playing is switch to performance mode.

The soundtrack doesn’t have many memorable tracks, but it does a great job of matching the tone and theme of each world as needed. For example, music inspired by sea shanties plays in the beach world levels, while you’ll hear theremins and lasers when romping through the space world. Mixed into all this are various classic sounds and samples of tracks from Pac-Man’s arcade heyday, which help to tie it all together and feel less generic than it otherwise might.

Pac-Man World Re-Pac isn’t a game that we’d suggest you rush out and buy at once, but it does a good job of reviving a decent 3D platformer for modern audiences. Tight controls, lots of collectables, and enjoyable level design ultimately outweigh minor performance hiccups, and a general lack of imagination. If you don’t consider yourself a fan of platforming or Pac-Man, nothing here is going to change your mind and we’d suggest you pass. If you like classic-style 3D platformers, Pac-Man World Re-Pac will absolutely prove itself worth your time, even if it doesn’t impress like the best in the genre.